We Have a Sleep Problem (Again)

You might remember how our sleeping situations was really awful.  In the last few months in the US sleeping was not so bad.  The kids were sleeping on twin mattresses on the floor of their room, not pushed together like before.  Putting them to bed meant a bit of snuggling, then sitting by the door reading until they fell asleep.  It was still a lengthy process, but at least I got to read during part of it.  Also they slept a lot better, and normally only one would wake up once in the night.

Then we moved.  Now the kids are again sleeping on twin mattresses pushed together into one giant bed.  I have been so lazy (in part because I have been doing 99% of the putting to bed because of Aaron’s foot problems and the kids’ mommy-neediness due to the new living situation) I have been snuggling between them until they fall asleep.  This is a long and often frustrating process.  Additionally because they are sleeping in essentially the same bed, they wake each other up all night long.  For some reason even though they go to bed in normal positions, they end up like this: 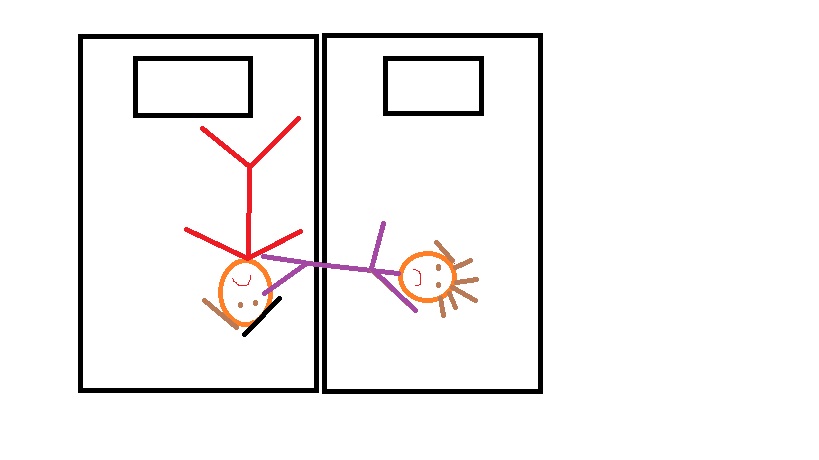 This means that I end up in their room every night, and because I am too tired I just stay in their bed.  And get kicked.  And half-sleep.  It’s horrible.  I mostly just wrote this blog to whine, but I think instead I will go back to the snuggle-read-beds-apart situation so I can get some sleep.  Wish me luck.

(P.S. Harmon doesn’t really have half brown and half black hair.  I am just too lazy to go fix it.)

This entry was posted in harmon, sammy, Uncategorized. Bookmark the permalink.