Posted on December 4, 2008 by aaron
G-Pop (That’s what my dad insists on being called, and since he doesn’t read this blog, we can all openly laugh about it) calls Harmon a “VAB” or Very Advanced Baby. I just figure he stayed in a month too long and that’s why he can do all the strange and strong things he does. Last night for example I put him to bed on his back and went to the bathroom, I came back to him fully turned to his side. I thought perhaps Aaron had done it, but it turns out that Harmon just decided to tell us that back sleeping for sids prevention is not for him. Each time in the night when put back to sleep he did the same thing. I suppose I should just start him out on his side and save him the trouble, but that won’t get those ab muscles a good enough work out.

Thanksgiving was great, Uncle Caelin managed to get Harmon to laugh for the first time. And the day after I was treated to some great smiling in response to my own lovely smile. Laughing before smiling? I guess Uncle Caelin is pretty funny.

Not much else to report. I tried to measure him today and came up with 25″. Here are some pictures so all grandparents can rejoice. More can be found here if you are really obsessed and want to see his entire portfolio. 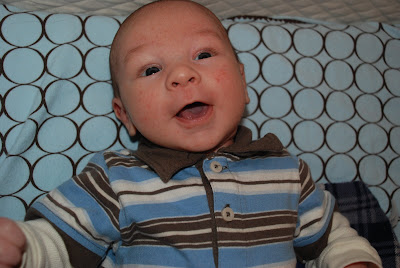 He’s smiling at you 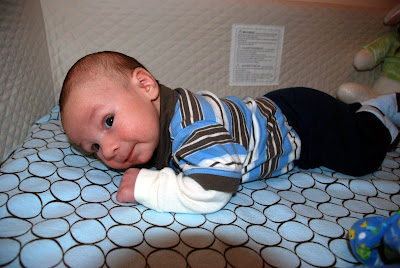 Mr. Muscles does his workout 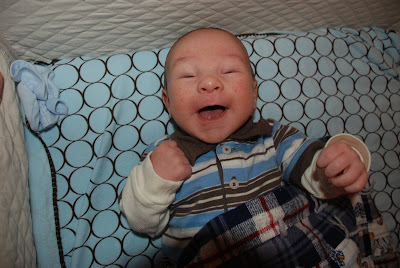 Now he’s laughing at you 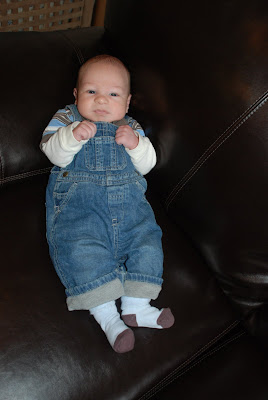 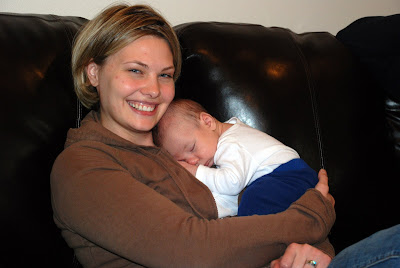 He loves his Aunt Billie. She is a natural. She should make cousins.
This entry was posted in Uncategorized. Bookmark the permalink.