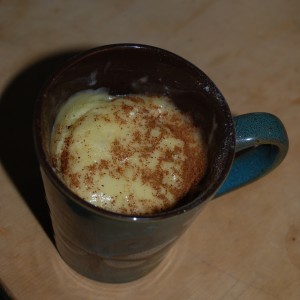 Lately I have been making a lot of desserts in the microwave due to lack of oven.  Most recently I made this sugar cookie recipe and it was pretty tasty.  Many thanks to Melissa at No. 2 Pencil for being a genius!  After a few times of eating that I decided I would take her recipe and make it chocolate chip, even though she had a chocolate chip recipe I didn’t want to look it up and figured it probably just substituted half the white sugar for brown.  Also there are no chocolate chips here, but whatever.  I made it the way I thought and it was super tasty.  I looked hers up later and hers is slightly different.  I’m sure just as tasty.

A week or so ago we made snickerdoodles at the house of friends who own an oven.  Since then all I want to do is eat snickerdoodles.  This morning at breakfast time (don’t judge!) I realized I could make one in the microwave!  So, without further ado here are two ways to make snickerdoodles in your microwave.

First melt butter in a nice microwavable mug.  Then add sugar, salt, cream of tartar, and egg yolk, mixing them all together.  Then add the flour, and mix it up real good.  Sprinkle a liberal amount of sugar over the top, and as much cinnamon as you like.  If you are me you will cover the entire top with cinnamon.  Microwave for 30-45 seconds depending on how strong your microwave is.  Then enjoy.  It was super tasty and I loved it.  This is probably not enough to share with another person.

The steps to making this are just like above except cook 45-60 seconds.

I made this version to share with the 3 other mouths that live at my house. In truth I probably only shared 7 small bites though. I actually preferred this version, and Aaron said it was delicious, but was almost more like a cake than a cookie. Either way, I highly recommend this tasty treat, especially if you don’t have an oven and are craving snickerdoodles. You’re welcome.

This entry was posted in recipe. Bookmark the permalink.