You just looked at several pictures of Harmon, but here is one more of him wearing some sweet old Nike’s that were either mine or Justin’s. 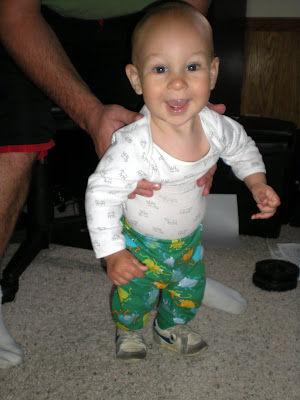 Month 7-8 for Harmon was quite busy. He got his passport and ventured out of the country, took a road trip to Montana and played with all his aunts and uncles and cousins on dad’s side (but we missed Jayde!), went camping, moved to his second house, got his own room, learned to say “mas” & “hola” (but won’t say hola now), found Ecuadorian babies bigger than him, ate lots and lots of new and delicious foods, practiced rolling from place to place, developed a new loud scream, got frustrated a lot from not crawling, flirted with lots of ladies, and much much more. Harmon loves to eat, loves to be held, and loves to laugh. And we love him. The end.

One Response to 8 Months