Or “How Gringos & Ecuadorians Celebrate Carnival in Ecuador” 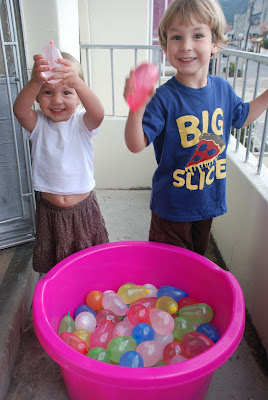 If you like water fights, you would like Carnival in Cuenca. If you don’t, then you better stay indoors. Starting on Saturday, water and foam spray fights began breaking out across town. The volunteers in the orphanages were attacked by the workers with buckets of water, and most of the orphan kids were armed with squirt guns and if they wanted got “thrown” into the kiddie pool. There were even reports of nuns getting in on the action. If you walked through town anytime between Saturday through Tuesday you were a moving target for groups of people in the back of pickups armed with water balloons, buckets of water, and spray foam. Or course you could just as easily be attacked by kids holding their cans of spray foam walking down the street. And finally you need to be careful of crazy people standing on their balconies hitting innocent people trying to get from one place to another. Like these ones: 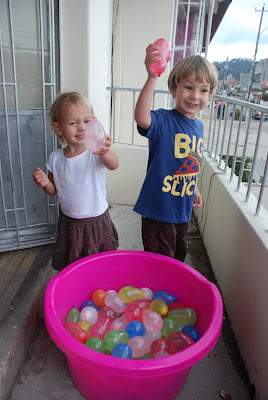 We had lots of fun with squirt guns for about 10 minutes the day we bought them until they broke. On Saturday we broke out the two cans of spray foam which I originally thought was silly string, and the kids had fun spraying the patio. On Monday we decided it was water balloon time, and made 100. Mostly the kids dropped them over the balcony onto the front patio, but occasionally some English speakers would walk by on the far side of the road and I would loudly tell the kids to hit them. This made them laugh, as obviously a 2 and 3-year old would not be launching balloons that would land anywhere near them, and most would pretend to be scared as Sammy and Harmon threw as far as they could and reached the sidewalk on our side of the street. After a while Aaron took a break from working and came out below us. We made sure he got plenty wet, and he got us a few times with balloons he caught. Late Monday afternoon we were sad we were out of balloons with an entire day left, so we walked a block and a half to a little store that was still open (most everything has been closed) and bought 200 more balloons for Tuesday. Tuesday was pretty much the same as Monday, we sat on the balcony and had fun dropping balloons over the edge. I was apparently more careless with the filling of balloons, and made them all a lot less full, so when the kids dropped them, several did not pop. (Give me a break, filling up 200 balloons is a lot!) This meant lots of ammo for Aaron when he came out, and also several rolled onto the sidewalk, much to the joy of kids who passed who now had protection walking down the street. Oh, and one adult male who spoke English (slight accent, couldn’t place it) who was soaked with water and foam. He was happy to pick up 3 that had rolled to the street so he could protect himself and his wife. Aaron definitely won Tuesdays event, leaving the other three of us quite wet. And the playroom, and the windows.

It is a fun holiday in Cuenca, everyone does lots of BBQing, lots of family water fighting, music, and of course a few fireworks. It is more or less the same as when many other people in the world are celebrating, right up until what is called Fat Tuesday in the US, the last day before Lent begins. Today is Ash Wednesday, and here in Ecuador you will see many people who have been to church to begin their Lent observance with ash on their foreheads. In our house however, we are just sad we are out of water balloons again.

This entry was posted in ecuador, holiday. Bookmark the permalink.