Buying an RV is hard. Sort of.

Almost 4 weeks ago we decided that we were going to get an RV and live in it.  All around the country.  That part was pretty easy.  Scary, insane, but easy.  Then we started looking.  And looking.  We set a budget, and knew that we needed something big, because we have lots of humans.  But that was about it.

Aaron spent tons of time the first week reading reviews about “Diesel Pushers” (More powerful!  Last forever!) vs. “Class A Gas” (Less expensive price! Less expensive fuel! Less expensive repairs!) RVs, and even came across something we didn’t realize existed, RVs with bunks!  We even toyed with the idea of getting an old bus and renovating it to our liking.  We stayed up until the wee hours of the morning the first week (at least) talking about RVs, looking at RVs online, reading about RVs, drawing custom bus plans, etc.  Many times Aaron would joke that we should just hurry up and buy something so we could get some sleep.

The first motorhome we looked at (and spoiler alert: the one we ended up buying two weeks later after seeing what felt like one million other ones) was being sold by a nice couple 25 minutes from our house.  We went and looked at it and really liked it.  It was 12 years old but in amazing shape, and as they were the second owners we assume that neither owner used it very much, and when it was not in use it probably sat inside a garage.  Plus the price was good, especially for what it was.  The main drawback from the start was how would we all sleep comfortably?

Aaron and I each had a list of the most important things we were looking for in an RV.  I don’t remember his list (maybe when he comes home from getting sparklers I will ask…) but my top three were reliability, comfort of sleeping, and easiness of driving/safety.  To choose to live in an RV fulltime I really felt that the kids needed comfy places for sleeping, because if they sleep terrible, I sleep terrible, and then I am super cranky.  (That will surprise exactly zero of you who know me at all…)  This first RV had a queen bed in the back, and a jackknife couch in the front (cushions pull down to be the bed, not a pullout couch) but no bed at the table like in many RVs because the table has real chairs at it.  We had already seen pictures of RVs with bunks and considered that we would probably have to modify to put in bunks where the table was if it was going to work.  So we went to look at more RVs.

We spent the next two Saturdays and a few weekday afternoons as well at several RV dealerships that had RVs we were interested in.  We saw some we like fine, and one we LOVED.  So just get it, right?  Wrong.  There is apparently a type of motorhome called a Super C.  Class C motorhomes are the kind with the overhang over the cab, and we (Aaron, because he is the researcher) had already decided we wanted a Class A (big huge front windows, no overhang up top) because of power of the engine reasons.  (Something about what kind of frame it is built on too, or something?  You can ask Aaron if you care about stuff like that.  You can tell that I maybe don’t…) The Super C has an overhang with a bed up top, but a more powerful engine.  A few models even have bunks.  One we found had bunks and the cool bed over the top and lots of space.  We for sure loved it.  Except the price tag.  So we (semi-responsibly) walked away from the first Super C.  But we couldn’t put it out of our mind.  We later heard that one sold the next day, something about people in Utah having a lot of kids and needing bunks to sleep them all in or something…  We had a hard time getting the Super C out of our minds, and went to look at one more even though it was well beyond the limit we had originally set for ourselves.  A second time we were sort of responsible and walked away.  Outside of the two Super Cs, no other RV had impressed us more than the first one we saw.  Plus the price was better because it was a private seller instead of a dealer.  And also most of the dealers made us want to die because they were the worst.

Finally (two weeks! An eternity in RV years!) we went back to the first one we saw, and asked if we could test drive it.  Frankly I am surprised they still had it, but maybe it was just our destiny.  We knew if we got it we would need to put in bunks, but we hadn’t seen anything in as good as condition so we thought it would be worth it.  Right before test driving it the owner showed me exactly how the couch pulled out.  Originally I had thought it was just a double bed, and would only fit two kid without extreme fighting.  When she pulled it out she revealed a secret foot rest panel and ta-da!  It was actually a Queen!  Suddenly all my kids fit! (The baby will go into a small pack n play type situation)  I took it for the first test drive, then Aaron, and we both were happy enough.  (Aaron wanted a diesel pusher, because it is more powerful, but was satisfied with this for the price/benefits.)  We told them we would call them the next day, went out to the car, and two minutes later returned to their front door to talk price.  We quickly agreed and just had to wait for the windshield to be replaced and them to return from their vacation.  No hurry we said…

Yesterday, after almost another two weeks the owner calls to tell us she is back from vacation and the windshield would be ready that afternoon!  As an added bonus, even though it was the 3rd of July and many places were closed for 4th of July observance, the credit union where she had her loan (and we got ours) was open!  We met later in the afternoon, did all the paperwork, and got the keys!  I convinced Aaron to let me drive it home, so I strapped the three big kids in and drove home.  Aaron followed me in the car with the baby.  And now we are the proud owners of giant RV.

Here is our first picture of the 2003 Winnebago Adventurer which measures in at a lovely 37′ 4″.  More pictures to come, along with an account of our first night in the RV (in the driveway with no AC) last night… 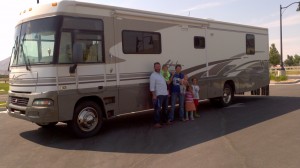 This entry was posted in RV Life. Bookmark the permalink.

One Response to Buying an RV is hard. Sort of.